State supreme courts are central players in the U.S. democratic system.  The State Democracy Research Initiative is spearheading an effort to shed new empirical light on their work.  We are collecting data on thousands of state high court rulings across country, coding dozens of variables on each case: procedural history, type of legal issue(s) presented, type of outcome, alignment of justices, identities of parties and attorneys, participation of amicus curiae, and more.

We have preliminarily completed a comprehensive 50-state dataset for all published substantive decisions issued in 2018—nearly 5,000 cases in all.  We are currently gathering historical data on decisions issued in selected states at 10-year intervals: 2008, 1998, and 1988.

Initial findings of interest from the 2018 data include:

This presentation offers additional information on the study and its preliminary findings: 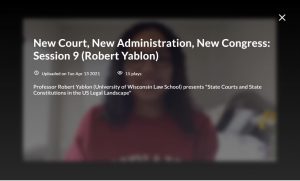