A panel on Interpretation in the States: Views from the Bench highlighted perspectives of state high court judges, who shared interpretive dilemmas they’ve confronted and identified aspects of state law that warrant greater attention from scholars and the public. Meanwhile, academic panels explored interpretive methods, interpretation of state and federal constitutions, and other interpretative questions affecting state institutions. Essays from conference participants will be published in a special issue of the Wisconsin Law Review in November 2022.

Interpretation in the States: Views from the Bench 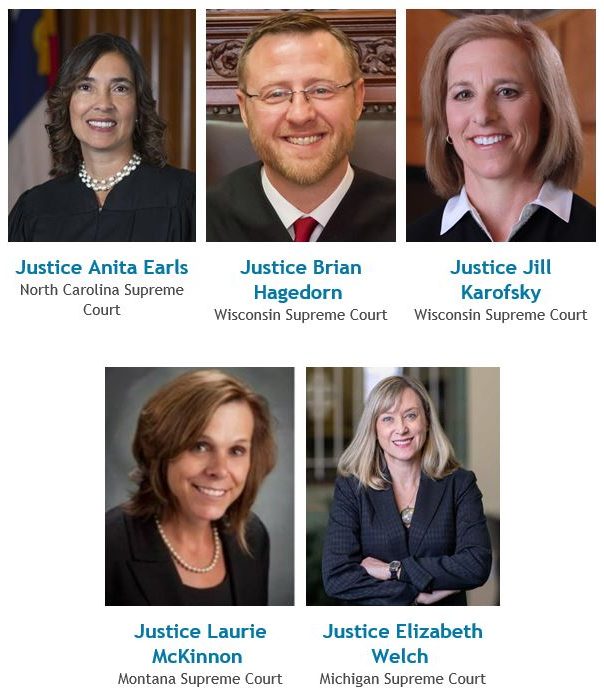 Justice Earls discussed State v. McLymore, where the North Carolina Supreme Court interpreted a felony disqualifier provision of the state’s stand-your-ground law. The prosecution had argued that a self-defense instruction should not be provided because the defendant was unlawfully in possession of a firearm. Driven in part by a desire to avoid the absurdity of categorically prohibiting anyone with a prior felony conviction from using a firearm in self-defense, the court interpreted the disqualifier provision to require a causal nexus between the disqualifying felony conduct and the act of self-defense. Absent such a requirement, anyone with a prior felony conviction would have been categorically prohibited from ever using a firearm in self-defense, which the court regarded as an absurd result that the legislature did not intend.

Justice McKinnon indicated that in her view, rules of interpretation are an important part of the rule of . She also highlighted the role of separation-of-powers principles in several matters before the Montana Supreme Court. For instance, after the court took up a challenge to a bill that would abolish the state’s Judicial Nominating Commission and give the governor the power to fill judicial vacancies, the legislature subpoenaed thousands of emails between the state high court justices and the court administrator. The court issued an order to stop these emails’ release, which the state Attorney General opined was not binding on the legislature. The legislature, in turn, filed a motion to disqualify all of the justices on the subpoena case. Justice McKinnon authored an opinion denying this motion for disqualification, citing to a “fundamental right” under the Montana Constitution that “[c]ourts of justice shall be open to every person”.

Justice Hagedorn observed that the Wisconsin Supreme Court has increasingly found itself facing interpretive questions in politically charged cases. Building off Justice McKinnon’s remarks, Justice Hagedorn also pointed to separation-of-powers issues in Wisconsin. For example, he noted that the court has considered disputes involving the Governor’s line-item veto as well as questions regarding whether local governments are subject to the non-delegation doctrine.  Justice Hagedorn urged academics and advocates to be mindful of originalist interpretations, including of state constitutional provisions.

Justice Welch discussed challenges that state supreme courts face in the context of redistricting cases. In Michigan, voters established an independent redistricting commission via ballot initiative in response to extreme gerrymandering. Like other redistricting entities, the commission got a late start due to delays in the release of the post-2020 U.S. census data. The commission filed an emergency request seeking additional time to complete its work, which the Michigan Supreme Court rejected. Justice Welch indicated that one difficulty in cases such as this one is that the public might not fully understand the reasoning behind the court’s decision. She explained in her concurrence that the court’s hands were tied because the commission had not yet missed a deadline, which was a prerequisite for granting relief.

Justice Karofsky focused on the case of State ex rel. Kalal v. Circuit Court for Dane County. Kalal, which is among the most cited cases in Wisconsin because it outlines the court’s approach to interpreting statutes. Under Kalal, only where the text is ambiguous may the court look to other indicia of meaning. Yet, as Justice Karofsky pointed out, the word “ambiguous” can itself be ambiguous. Therefore, implementation of Kalal can sometimes involve judicial discretion, even when the court is not explicitly exercising discretion. Justice Karofsky suggested that courts at times would do well to focus more directly on what justice requires.

The justices then spoke about the resources they have relied upon for state-level interpretation, and the kinds of interpretive questions that would benefit from deeper academic engagement. Various justices emphasized that it can be helpful to examine how other states have interpreted similar laws or provisions, even though states’ legislative and judicial processes can differ significantly.

Interpretation in the States: Academic Panels